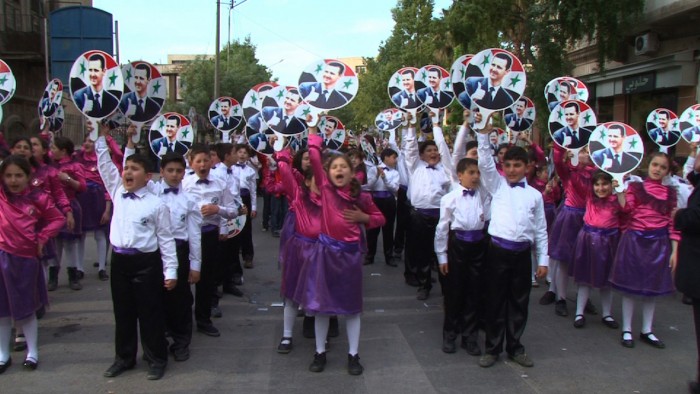 Land Arts is pleased to announce “Abounaddara. The Right to the Image,” an online art exhibition that seeks to illuminate the contemporary conditions of the Syrian revolution, show solidarity with civil society in Syria, and provoke new thinking about media representation. Organized by the Vera List Center for Art and Politics at The New School, Slought, and Project Projects/P! in collaboration with Abounaddara, this virtual, distributed online exhibition seeks to spread awareness of Abounaddara’s widely acclaimed work as an anonymous collective of volunteer, self-taught artists in Syria.

The exhibition will be activated through postings of new work at exactly 12pm noon EST on three Fridays: October 23, October 30, and November 6, 2015.

The Syrian revolution has transformed the political landscape of Europe, the Middle East and now the U.S. As it dominates a global discourse on warfare, migration, and media representation, the only voices still reaching us directly from Syria are those of artists. The exhibition “Abounaddara. The Right to the Image” connects with these voices and demonstrates that cultural institutions care deeply about, and can provide direct access to, issues of great social, political, and cultural urgency. Like the work of Abounaddara itself, the exhibition offers an image of Syrians that respects the complexity of the situation and advances the right to be represented beyond categories of race, religion or political affiliation.

In situations of war and mass violations of human rights, our hyper-mediatized world creates the typical images of victims. We live in a world filled with images that are captured, edited, and published at hyper speeds. The images of the human debris of human madness are too frequently about mutilated and starved bodies, not about persons; they are too frequently images of the dystopian landscapes of wretched camps and the ruins of devastated neighborhoods and not images of the network of social relations and forms of collective cultural and political life that sustains individuals in their struggle for life in dignity and peace. Representations of human suffering and injustice are not only the effects of aesthetic choices; these are also political and ethical choices.

It is as much about individual choice and the dignity of the human person, as it is about the right of a people to freely determine the terms of their political association including issues related to the expression of cultural identity.

Abounaddara is an anonymous collective of volunteer, self-taught artists whose practice is founded on the principle of emergency and an attitude of defiance towards established powers and the culture industry. Since April 2010, Abounaddara has produced self-funded, weekly short films and made them freely available to the public online. These films are anonymous and open-ended. They offer a glimpse of ordinary Syrians without restricting them to political or religious affiliations, while focusing on the details of daily life and evoking horror without ever showing it. The work of Abounaddara thus provides an alternative to the customarily extremely violent representation of the Syrian condition and is generated in close collaboration with the individuals featured in the videos. Abounaddara aims to empower civil society to independently produce its own image. An artistic project that employs the aesthetics of cinema in a spirit of do-it- yourself and disorientation, Abounaddara is also a political project that plays on anonymity and dis-identification to construct a space of resistance. The films do not look to prove a point, but rather to defend the rights of everyone to a dignified image.

For their courageous and groundbreaking work, Abounaddara have been recognized by Human Rights Watch, the Venice Biennale, the Sundance Film Festival (2014 Sundance Short Film Grand Jury Award), the Vera List Center (2014 Vera List Center Prize for Art and Politics), and many others.

Acknowledgments
In conjunction with the second Vera List Center Prize for Art and Politics,
awarded to Abounaddara on October 22, 2015