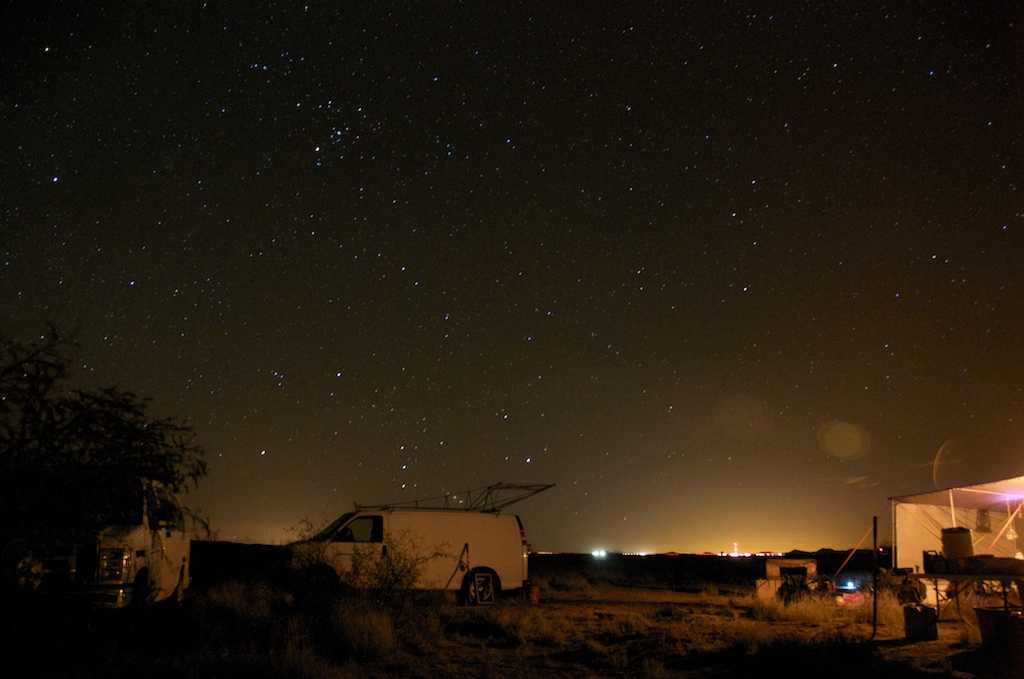 There is no “I” in Land Arts. Thriving in the desert requires community.

The exhibition culminates Land Arts of the American West at Texas Tech, a semester-long interdisciplinary field program in the College of Architecture that expands the definition of land art through direct experience of the complex social and ecological processes that shape contemporary landscapes. These forces include everything from geomorphology to human construction, and cigarette butts to hydroelectric dams.

The exhibition will launch with an opening reception on Friday, 12 February 2010 from 6 – 9 pm. There will be a closing reception in conjunction with the First Friday Art Trail on Friday, 5 March 2010 from 6 – 9 pm. The exhibition will be open for viewing by appointment and on Saturdays from noon to 5pm. To set up an appointment contact Chris Taylor by phone at 806-392-6147 or by email at chris.taylor@ttu.edu.

About Land Arts
Land Arts was founded in 2000 at the University of New Mexico by Bill Gilbert with the assistance of John Wenger. From 2001 to 2007 the program developed as a collaboration co-directed by artist Bill Gilbert and architect Chris Taylor, then at the University of Texas at Austin. During this time Land Arts established a momentum of inquiry and production that has been the subject of many exhibitions and publications.

In 2007 Taylor extended the reach of Land Arts to Chile by leading an interdisciplinary conference in Santiago and a field expedition through the Atacama Desert. The enterprise is documented in the book Incubo Atacama Lab with texts in Spanish and English including a preface by Incubo, introductory essay by Taylor, excerpted field notes by writer William L. Fox, and essays from archeologist Flora Vilches, art historian Gonzalo Pedraza, architect Rodrigo Perez de Arce, geographer Pilar Cereceda, and glaciologist Andres Rivera. It is fully illustrated with photography by Jorge Brantmayer, Blake Gordon, Barbara Palomino, and Chris Taylor.

2008 marked a programmatic expansion for Land Arts with the arrival of Chris Taylor in Lubbock to join the faculty of Texas Tech’s College of Architecture. The Llano Estacado and the College of Architecture provide an ideal laboratory base for the program’s interdisciplinary work. Land Arts now operates autonomously at the University of New Mexico and Texas Tech. The 2009 Lubbock field crew was composed of architecture students and one post graduate from Yale (Meredith James, MFA Sculpture). Future years will include broader interdisciplinary involvement from students across the Texas Tech community in addition to participants from outside the university. The 2009 field season was made possible with generous operational support from Andrea Nasher.

In early 2009 the Nevada Museum of Art announced the creation of the new Center for Art + Environment and the acquisition of the archive of Land Arts of the American West. This collection will include artifacts from the development and creation of the program and a commitment to acquire ongoing Land Arts materials.

In 2009 the University of Texas Press published Land Arts of the American West, which recounts the history of collaboration between Bill Gilbert and Chris Taylor as they developed Land Arts. The book is organized around places they visit during field seasons each fall, which come alive through color photographs and descriptive information about natural and human history; first-person experiences from student journal entries; essays by William L. Fox, Ann Reynolds, J.J. Brody, and Lucy Lippard; and interviews with Matthew Coolidge, Mary Lewis Garcia, Graciela Martinez de Gallegos and Hector Gallegos. Woven throughout is a conversation between Taylor, Gilbert, and Fox, about the program’s origins, pedagogic mission, field operations, guests, and future directions.

About the College of Architecture
The College of Architecture at Texas Tech University is located in Lubbock where architectural education has been offered since 1927. The college includes 850 undergraduate, graduate and PhD students and 50 faculty members. Graduate certificate programs are offered in Historic Preservation, Visualization, Community Design, Rural Health Care Design, and Digital Design Fabrication, as well as an interdisciplinary doctoral program in Land-Use Planning, Management, and Design. To extend the academic offerings on campus every forth year student participates in directed summer study abroad offerings in places such as Berlin, Granada, Paris, Seville, and Verona. The introduction of Land Arts within the college offers tremendous opportunities to expand field study and connect teaching and research more directly to the landscapes we inhabit.

About the Louise Hopkins Underwood Center for the Arts
The mission of the Louise Hopkins Underwood Center for the Arts is to inspire and enrich our community by being a catalyst for the arts. Celebrating ten years of serving our community, LHUCA is proud to announce this fabulous addition of the Warehouses on Mac Davis Lane as part of the LHUCA Campus. Our campus, located on a two city block area of downtown Lubbock, is the heart of the cultural district. The campus includes the FireHouse Building with a state-of-the-art theatre and four exhibition galleries, the Helen DeVitt Jones Clay Studio, and the IceHouse that provides rehearsal, event and gallery spaces. The Graffiti Building, equipped with a classroom and teaching gallery space, will open in April of this year. The newly acquired Warehouses will provide alternative exhibition and studio spaces for creative works that reach beyond the traditional gallery presentation. Land Arts 2009 Exhibition will demonstrate the flexible use of this space and serve as a magnet for the cultural growth and educational dialog between creator and viewer. The Board of Trustees and staff of LHUCA invite you to join us in celebrating the redevelopment and renovation of the cultural heart of Lubbock.

If you would like more information about Land Arts or to schedule an interview with Chris Taylor contact him by phone at 806-392-6147 or by email at chris.taylor@ttu.edu“. Additional information about the College of Architecture can be found by contacting Jess Schwintz at 806-742-3169, ext. 247 or visiting http://arch.ttu.edu, and the Louise Hopkins Underwood Center for the Arts by visiting http://lhuca.org.